From FritzWiki
Jump to: navigation, search
http://www.fritzfreiheit.com/wiki/Doc_Morrow:_The_Neopolymath is best viewed with JavaScript turned on.

Where the future wears a shiny spacesuit. (e) 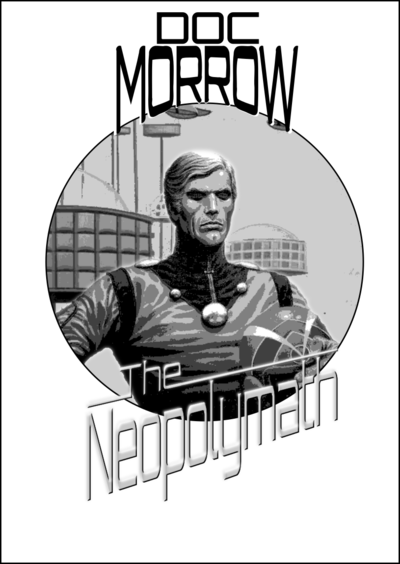 Doc Morrow: The Neopolymath is the first novel in the Doc Morrow World series. (e)

In Doc Morrow: The Neopolymath enter a shiny new alternate history of the 20th Century, one which envisions the year 2000 from a 1950’s Atomic Age science fictional perspective, one with a shiny-spacesuit Atompunk sensibility. It has been a century driven by a deeper Great Depression, three world wars, and a full-out atom-powered race to space. Follow Doc Morrow, “The Neopolymath” and his six companions in an adventure where the seven members of the “Doc Squad” pursue the murderer of Doc's father, The Polymath, from the mile-high towers of Chicago to the underground-tech-Mecca of New Zurich-Geneva, to a final confrontation on the Morrow's asteroid space station in L5-Earth orbit. (e)

The Man of Bronze (1933)
by Kenneth Robeson
Doc Savage
Paperback

post-beta, targeted for publication in 2020