From FritzWiki
Jump to: navigation, search
http://fritzfreiheit.com/wiki/About_Fritz is best viewed with JavaScript turned on. 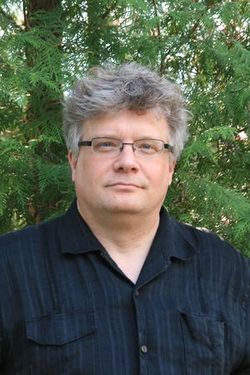 I'm a writer who has made good (bad?) as an author-publisher after more than a decade of unpublished work. After many years of reading, I decided to try and to publish my first novel and a handful of short stories (all of which are set in the same world) in the traditional manner. This didn't work out. I wrote my second novel, Dispensing Justice (DJ), and after receiving a number of rejections (some of them encouraging), I decided to self-publish in late summer of 2011. By early December Dispensing Justice was available as an ebook, and the paperback followed in the first quarter of 2012. I've continued writing, and my third novel (2nd published, sequel to DJ) The Red Rook has gone live as both an ebook and print on Amazon. I've published my 4th novel, Parallel Visions: City of Angels City of Demons, and currently working on publishing my 5th (Doc Morrow: The Neopolymath) novel, as well as (finally) my first (Tactics of Transience) novel and a collection of short stories (Chronicles from the Nexus Volume 1).

My writing can be described as action-adventure SF that harks back to the golden age of space opera, but with a strong dose of modern SF, drawing from the sub-genres cyberpunk and the new space opera. My first published novel (as versus my first novel, which is a far-future transhuman action-adventure caper story) is an alternate history science fiction superhero coming of age story. It's sequel is also alternate history science fiction superhero story. I'm currently working on an urban fantasy novel with a SF twist, as well as a Doc Savage inspired novel in an "atomic punk" alternate history setting.

I live in Ann Arbor, Michigan and can be found in local book stores trying to avoid adding to my library or online puttering around on this wiki.

My last name, if you were wondering, is pronounced "Fryheight" and it means 'liberty' or 'freedom' in German.

Send me a message using this wiki page or you can email directly me at this address: fritz (at) acm (dot) org
Blog Amazon Author Page Facebook Goodreads LinkedIn MeWe Pinterest Twitter ...
(e)

I am the author-publisher of two action-adventure science fiction novels with several more in progress. In addition to writing and publishing, I work full time at the University of Michigan Library developing and maintaining software supporting an open source research data repository. I have a background in artificial intelligence and agent oriented distributed systems, as well as computational linguistics.

Some Comments About Writing

To paraphrase Frank Norris, I'm not in love with writing the vast majority of the time, but I love having written.